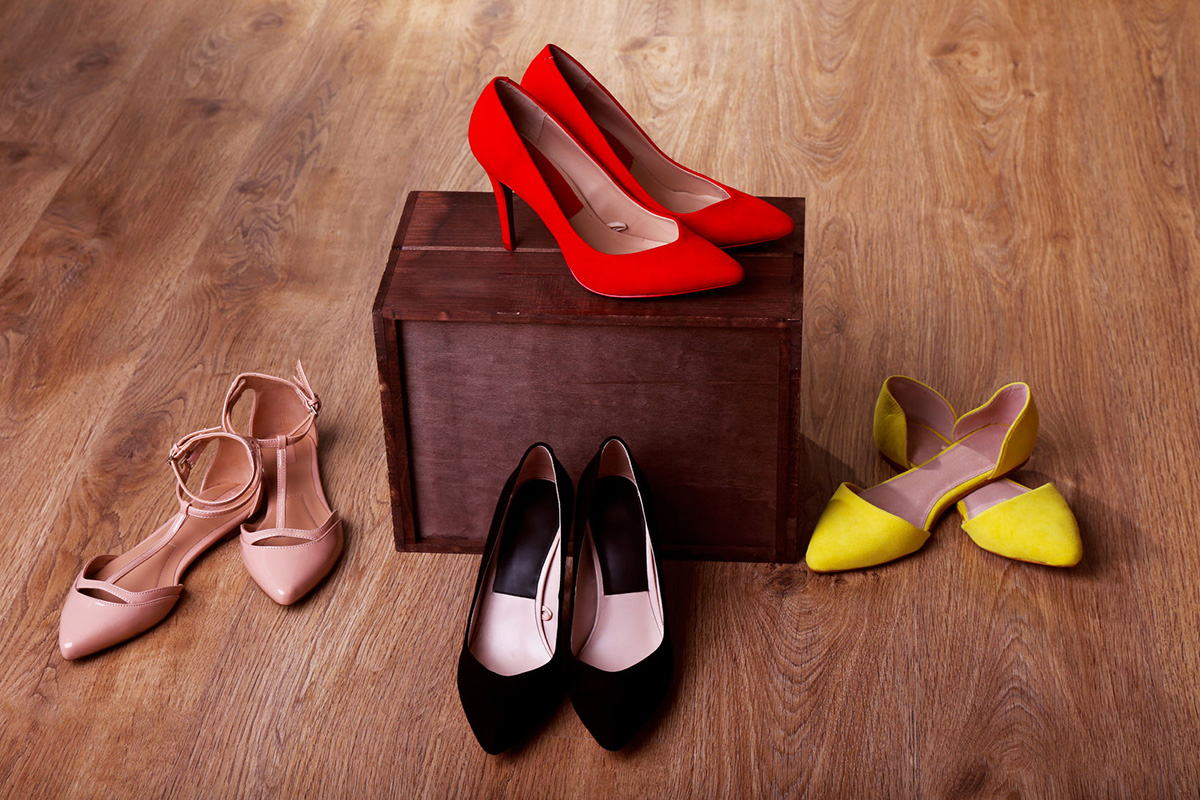 The controversy over high heels at work

There’s a row in the UK over whether employers should be allowed to force female staff to wear high heels at work as part of the dress code.

Regardless of the sexist nature of such an outdated policy, any company that compels women to wear heels is damaging its own progress. The hidden impact of high heels at work reduces women’s ability to succeed in the workplace and is likely to have a negative effect on the economy.

A raised shoe might look beautiful. It might give you the extra height and confidence to help you feel you can compete in a man’s world. But the downsides far outweigh the aesthetics. And any confidence you think your heels provide is built on a house of cards.

The effects of high heeled shoes are atrocious. And I’m not talking about pinched toes or bunions here. Wearing high heels at work can damage your voice and significantly reduce your executive presence – even though you might think it does the opposite.

The only reason that heels still appear on dress codes up and down the country is employer ignorance. And once companies realise the implications of their demands, things must surely change.

High heels at work almost equates to smoking at work. Cigarettes were once the norm in the workplace. People thought it made them look cool, feel calm and concentrate better. Nowadays no-one smokes at work and the dangers are well recognised.

Of course heels won’t give you cancer, but they can lead to vocal cord damage and other significantly negative effects which employers don’t take into account.

The row over high heels at work

The row started when PwC temporary employee Nicola Thorp was sent home without pay when she turned up to work in flat shoes.  She argued that this was discriminatory, as there are no rules requiring men to wear heels. She started a petition to make it illegal to put high heels into a dress code.

The headmistress of a well-known girl’s school then tottered into the row , encouraging girls and women to wear whatever feels comfortable on their feet. Jenny Brown, from St Alban’s High School for Girls, seems unaware that by putting forward this viewpoint she risks creating a generation of women with communication issues. This isn’t about foot comfort (perceived or otherwise). It’s about much more than that.

Nearly 150,000 people have now signed Ms Thorp’s petition and the government has responded that it “takes this issue very seriously and will continue to work hard to ensure that women are not discriminated in the workplace by outdated attitudes and practices”.

Two cross-party, independent government committees met this week to discuss the issue: the House of Commons Petitions Committee and the Women and Equalities Committee. Let’s hope they agree very soon to outlaw the discriminatory practice of forcing women to wear high heels at work.

When standing, high heels knock you off balance, forcing part of your brain to concentrate on steadying yourself on tiptoes rather than communicating with others. However comfortable you feel in heels, they make the balance part of your brain work overtime.

But balance is not the only issue that affects brain power. There is also a direct link between effective breathing and brain power. Breathing well is fundamental for thinking clearly, speaking well and creating executive presence. And you can’t breathe effectively if you’re standing in high heels.

The tiptoe foot posture created by high heels forces you to arch backwards to compensate for the balance issue. This stretches your abdominal muscles – pulling them tightly and leaving very little slack for you to breathe effectively into your belly.

Because your breathing is shallower, your breathing rate increases. You have to breathe more times per minute to take in the same amount of oxygen. And this faster breathing makes the body think it is under stress. It mimics the faster breathing of the adrenaline-prompted fight or flight response which allows you to act physically to save your life (running from danger or killing the enemy).

In today’s high pressure world, we are often under stress, regardless of whether we wear high heels or not. Mental stress is widespread and can lead directly to physical stress. We tend to become so habituated to physical stress that most of the time we don’t even notice it. But it’s happening under the surface nonetheless.

Breathing more quickly as a result of wearing high heels when standing can exacerbate your physical stress, and here’s what happens as a result…

Under stress, the body shunts oxygenated blood away from your brain and down to the muscles of your arms and legs that need it to deal with a life-threatening event. Less brain oxygen equates to less clear thinking. And that can be a problem, particularly if you need to express yourself successfully in a pressurised situation such as a business pitch, a talk or a media interview.

By wearing high heels at work and causing yourself to breathe ineffectively, you are impacting your ability to think clearly. And if you can’t think as clearly as you otherwise might, you can’t act or communicate as effectively.

It is impossible to use your voice effectively if your abdominal muscles are pulled tight due to your high heeled posture. You need to relax those muscles to project your voice properly and create a rich, resonant tone. And you just can’t do that effectively in heels.

The voice plays a major role in executive presence – the personal presence that grabs and holds attention, engenders trust, and gently persuades people to listen to you and follow your suggestions. Women with great voices use their abdominal muscles to achieve their sound. But if you wear high heels at work when you are standing to speak, you just can’t use your voice well, and your executive presence suffers as a result.

So if you wear high heels at work you do yourself a major disservice. You will demonstrate less executive presence and you are therefore less likely to achieve your potential in the workplace.

High heels at work equate to financial costs to the economy

It’s not all about executive presence. It’s about vocal health as well. If you stand in high heels, with your abdominal muscles effectively out of action, you will try to compensate for your lack of voice by using your relatively weak neck and throat muscles to project your sound forward. This is a great way to cause yourself vocal health problems.

Misusing your voice over time by standing to speak in high heels can have similar effects to shouting at a football match. You risk losing your voice temporarily and damaging it permanently. Most people need to speak at work, so with no voice, work suffers.

Many voice mis-users (high heeled women among them) are completely unaware of their unhelpful vocal habits until their voice disappears at a critical moment.

Those ‘one day a year’ absences alone lose the UK economy more than a million pounds a day and it is likely that high heeled women play a significant part of this financial loss.

Ditch the heels to fulfil your potential

Any employer who asks a female staff member to wear high heels at work is asking for trouble. They are opening themselves up to potential personal injury claims, damaging their employee’s chances within the workplace and reducing their own potential for success.

Why go to all the trouble of hiring someone good and training them up if you then do the equivalent of gagging them with your dress code?

As a woman in the business world you might believe that heels give you more confidence and make you appear more professional. That’s a very common misperception. All my female clients who take off their heels gain an immediate sense of power when I show them how to speak effectively in flats. And they are always surprised by how good it feels – it’s like being released from a cage.

The Managing Director of an international institution in the world of finance, for example, told me that as soon as she removed her shoes, “I felt more balanced and centred to speak and more in control”.

My message to all women is why harm yourself with heels when flats are a fantastic asset?

If you want to think well, speak well, stay vocal healthy and demonstrate gravitas and executive presence, just ditch those heels. Opt for flat shoes instead and give yourself the opportunity to communicate more successfully. You’ll thank yourself for it later.

It’s now the end of July 2016, and since I wrote this post the Petitions Committee asked me to submit an evidence paper explaining why it’s discriminatory for employers to require women to wear high heels.

My report has been picked up by the news media – The Telegraph, The Times and the BBC, for example. I’ve also appeared in women’s magazines, fashion pages and HR publications. And the story has gone global too. I’ve been quoted everywhere from The Sydney Morning Herald to Ghana News to Gulf News.

Hopefully all this media coverage will help the UK Parliament to recognise that heels put women at a disadvantage and to ban high heels from corporate dress codes.