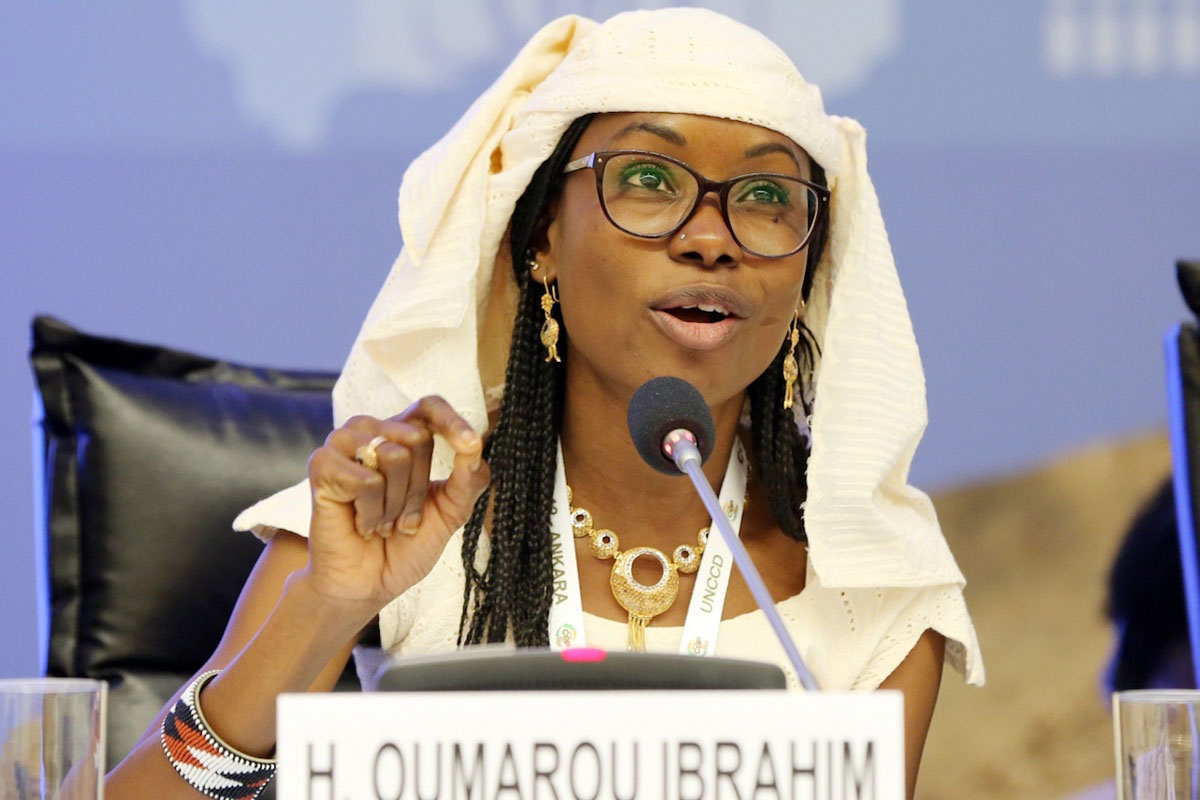 Great female speaker rises from poverty to wow the UN

Hindou Oumarou Ibrahim: the power of a great female speaker

Among the world leaders and dignitaries to speak at last Friday’s UN climate signing ceremony was a woman from a nomadic tribe in Chad, whose mother walked 10km every day to collect water and food.

Talking to the world from the podium at UN headquarters in New York – about as far from her roots as it is possible to get – Hindou Oumarou Ibrahim showed just how to capture and hold the attention of an international audience. Hindou is what I’d call a naturally great female speaker.

In fact there are far too few women out there who can do what Hindou does. Yes, she needs some work on her voice – she does sound a little squeaky. And yes, she could tweak the way she uses her notes – she looks down a little too much. But wow, does this woman have presence. And wow, does she make an impact.

Who is Hindou Oumarou Ibrahim?

Hindou comes from a group of people known as Peule Mbororo. This group consists of around 250,000 nomads who survive by growing just enough food to feed themselves and their families.

Hindou was chosen out of more than two hundred Chadians who applied to represent civil society at the event in New York, in which 175 countries signed an international agreement to cut carbon emissions.

With temperatures in Chad currently soaring to around 48C (118F), Hindou used the UN signing ceremony to warn of the dire consequences of climate change on her people.

She told how young mothers in the Mbororo community today cannot follow in her own mother’s footsteps by collecting water and food. Their pasture, their livestock, their food and their community are vanishing. “Climate change is adding poverty to poverty every day,” she lamented.

Many people are forced to become climate refugees, she explained. Men in particular leave Chad hoping for a better future. Women and children are left at home to cope with the climate change on their own.

“Migration is challenging for rich countries,” Hindou cautioned, “But it’s a tragedy for those who are left behind.”

She told the international audience of the very real threat facing Chad without financial support. “If you do not increase funding for adaptation, soon there will be no-one to adapt.”

Firstly she is a master of the pause. If you watch the official UN video you’ll see how she establishes her presence before she even begins to talk. That long silence as she stands at the podium and looks around draws people to her, making them aware that they need to pay attention.

She then uses carefully considered pauses between sentences to help the international audience understand and reflect on her message.

Her words hold great power. They are incredibly strong right from the start, as she thanks those present for the opportunity to speak and describes the UN assembly as “this assembly who decides war and peace, and who now has to decide the survival or the death of my community.”

Her physicality underlines everything she says. She emanates a sense of physical urgency to support her words, and she speaks with authenticity, passion, and vitality.

Not content with speaking with impact purely in English, Hindou delivers her message in no less than three languages: English, French and Arabic.

This makes her understood by a much broader section of the international audience, giving her the opportunity to demonstrate a more widespread authority and optimising her opportunity to influence UN member countries into implementing the climate change agreement.

Hope for the Peule Mboro?

While climate change is obviously devastating the Peule Mbororo, they should have hope in the bright star of Hindou Oumarou Ibrahim in their midst. Maybe this great female speaker might just make a difference to their very survival.