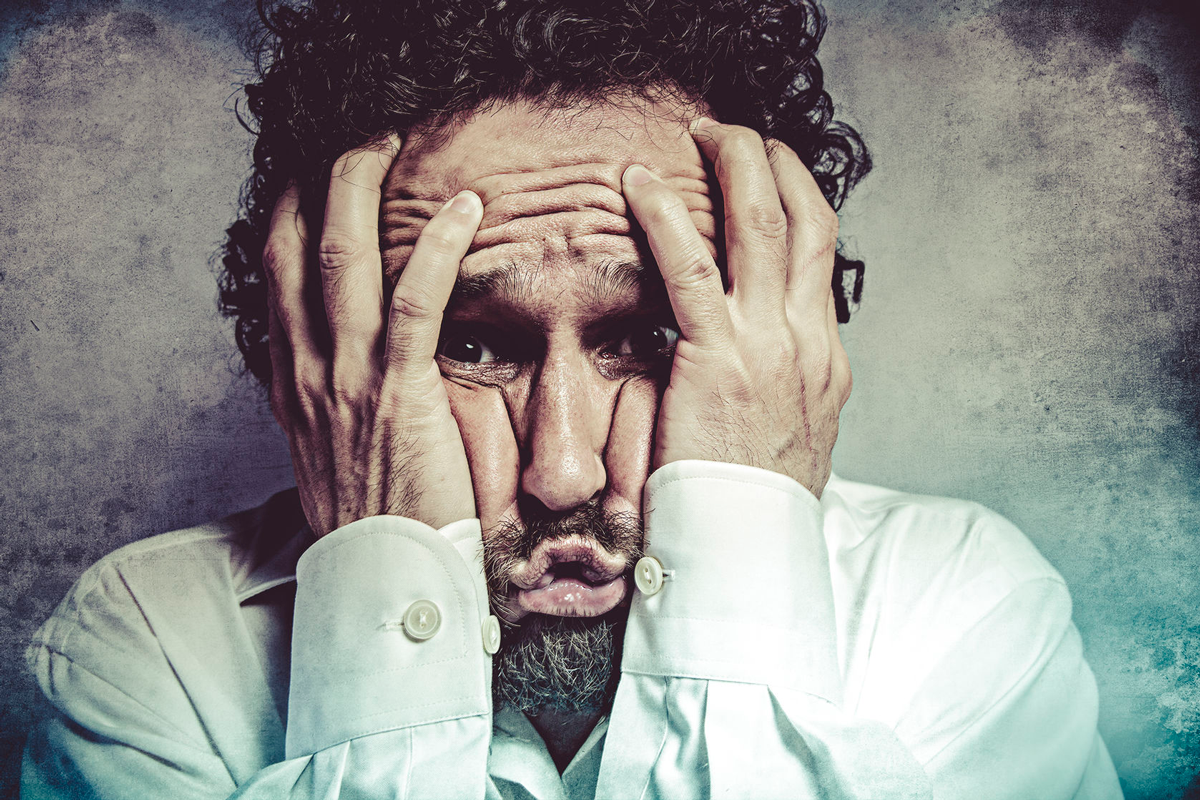 Could the nightmare happen to you?

Speaking in public. We all fear getting it wrong. And when it goes dramatically wrong, the embarrassment is all-consuming. Not to mention the frustration.

Perhaps this rings uncomfortable bells for you. Have your leadership communication skills ever flown out the window at a critical moment? Have you ever wished the floor would open up beneath you?

Many prominent people have come to a sticky end during a presentation that should have promoted them rather than mortified them.

Today, for your voyeuristic entertainment (and education), I’ve compiled five classic examples of catastrophic presentation failures, with advice on how to avoid similar situations.

1. Think before you speak

The top prize for talking rubbish (quite literally) goes to Gerald Ratner, the former Chief Executive of Ratners – a successful jewellery business in the UK and the US back in the 1980s.

In early 1991 Ratners was bringing in profits of £112 million. But one year later, after a single disastrous speech by its CEO, the company was £122 million in debt, with £500 million wiped off its share value. Gerald Ratner, unsurprisingly, was sacked. Ratners changed its name and eventually became a profitable business again. But people still talk about ‘doing a Ratner’.

So what did Mr Ratner do that was so bad?

He showed contempt for his customers by denigrating his own products – the very products that kept his company in business. At the time, Ratners sold a set of “cut-glass sherry decanters complete with six glasses on a silver-plated tray that your butler can serve you drinks on, all for £4.95”. Speaking at an Institute of Directors conference, Gerald Ratner confessed that people often asked how he could sell this set for such a low price. “I say, because it’s total crap,” he revealed candidly.

He went on to tell the audience that Ratners’ earrings were “cheaper than an M&S prawn sandwich but probably wouldn’t last as long”.  The comments that that sparked multi-million losses were filmed for posterity, and you can watch them here, with the ‘crap’ remark just after four minutes from the start, and the ‘prawn sandwich’ statement just after six minutes in.

So how can you avoid doing a Ratner?

If your leadership communication skills are up to scratch, you will always assess your material critically before you speak. Think about what you say from the audience’s perspective. Will they understand you? Is there any way your words might have a different meaning? Does your message come across clearly? How will it be perceived? If it gets out on social media or in the press, will there be any repercussions?

This all sounds so simple and straightforward, but as Mr Ratner proved, even the most successful among us can come a cropper. Talking of which…

If you want to fall flat on your face in a talk, don’t bother preparing it. There is a classic example of this from Sean Penn, who won an Oscar for Best Actor in 2004.

Famous actors speak fluently and effortlessly when they’ve learnt their lines. But when there aren’t any lines, even Hollywood icons can make us cringe.

Sean Penn hadn’t prepared an acceptance speech, and the video shows him shrinking into himself as he realises that he should have planned for the moment when the eyes of the world were on him, not to mention all his colleagues in the audience, who were watching too.

Scroll to three minutes in, where his speech begins, and you’ll  see him shifting uncomfortably from foot to foot. He stutters as he hunches into the microphone. You can feel the tension during the long pauses as he sighs and tries to figure out where to go next. His voice shakes slightly, giving away his nerves. The audience smile, but I’m sure they are squirming inside.

To ensure you never make an audience feel awkward, you need to know exactly what you are going to say. Create your speech very carefully beforehand and practise it well. But unless you happen to be an actor, don’t script it. You’ll never remember it word for word. Just know what themes and messages you want to put across, and how you want to people to receive them.

Run through your talk two or three times before the event to give you an idea of how it feels to verbalise. It will never come out the same way twice, but practising will allow you to improve your performance. It will also help you to firm up the content and structure in your mind, making you less likely to go blank while all eyes are on you.

3. Plan for the worst case scenario

Technology is all very well, but in this day and age we tend to rely far too much on PowerPoint, Prezi and teleprompter (autocue). And when technology fails – as it is prone to do at important times – it can ruin even the most carefully prepared presentation.

Early last year when former Alaskan Governor Sarah Palin fell victim to a failed teleprompter, she started burbling a stream of nonsense. The words were English but the sentences didn’t make sense. Her leadership communication skills were sadly lacking.

To her credit, she kept on going. But as the queen of controversial noise-making, Sarah Palin’s incomprehensible ramblings must have damaged her credibility, which was already pretty low with many people.

The main thing she could have done for herself was to work out her messaging clearly beforehand. What was she trying to say? How could she best convey that message? How could she remember it?

Knowing your content well will help you remain calm and collected when things go wrong. If you have no back-up plan, you can always return to your main message and reiterate it to reinforce your point.

You’ll know your call to action – what do you want people to do as a result of hearing you speak? Your whole talk should be focused around achieving this aim. So if you do get horrendously lost, just repeat your main message, go straight to your call to action and end your talk there. You’ll finish with aplomb and you’re more likely to come across with authority and credibility.

I mentioned a back-up plan – and no good speaker should be without one. Sadly, film director Michael Bay, was not a good speaker. When his teleprompter went down, the event became embarrassing for the organisation involved and humiliating for Michael Bay.

Mr Bay had been brought into a Samsung press conference to promote their new, curved television screen. He was obviously nervous and was more used to being behind the camera than in front of it. Video footage shows him almost wringing his hands as he desperately tries to think of what to say. The compere attempts to help – asking questions which should have elicited a good response. But it is no use. Michael Bay’s nerves overtake him and he turns around shamefacedly and leaves the stage with his head hung very low. It’s an awful moment.

This incident could have been avoided very easily. Whenever you use technology to support your talk, a simple back-up plan is to print your talk as bullet points on cue cards and place them on the desk or podium in front of you.

Oh, and do number your cards properly. There’s nothing worse than dropping them and messing up the order. Very embarrassing.

You’d think that politicians would demonstrate great leadership communication skills to encourage people to vote for them. That isn’t always the case.

For some reason, this US politician decided to batter the audience with his words. Bellowing wildly at his potential voters, while pacing the floor like a caged tiger, Phil Davison was determined to shout out his qualifications – including a Master’s degree in communication – and roar that they make him the right man for the job.

How I laughed, in the light of his performance. Oh dear. Poor man. He seems completely unhinged, and definitely not someone to put into a position of power.

But is he like that at home? Does he communicate with his family by barking at them? Does he wander back and forth across his living room – three steps to one side, three steps to the other? I imagine that the answer to these questions is ‘no’.

Mr Davison was trying to create an authoritative persona. He was aiming to sound like a leader. Instead, he opened himself up to ridicule. The Youtube video of his talk is entitled “Hilarious politician – worst speech ever”. I feel rather sad for him.

If you can’t be yourself when you are speaking, people will see right through you. Authenticity is vital, so don’t ever try to be what you are not. Allow your true self to shine through. (And do stand still unless you have a reason to walk.)

If you are truly passionate about your topic and if you want your audience to benefit from your suggestions and ideas, they will treat you kindly and you are much more likely to succeed in your aims. Being yourself will serve you well.

Of course many people aren’t exactly passionate about their topic. Perhaps it’s rather dry, or dull. If this is something you struggle with, do get in touch and I’ll show you how to boost your leadership communication skills, make your speech sparkle and avoid any gut-churning presentation nightmares.